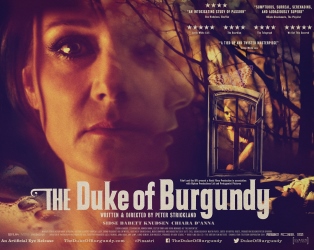 COMPETITION: WIN THE DUKE OF BURGUNDY POSTER AND DVDS

The Duke of Burgundy, a seductive tale of mistress and servant, opens this Friday, February 20th and to celebrate its release, we’re offering an official film poster and Peter Strickland’s two previous films, Berberian Sound Studio and Katalin Varga on DVD, courtesy of our friends at Curzon Artificial Eye!

In The Duke of Burgundy, we follow Cynthia (Sidse Babett Knudsen, Borgen) as she punishes the errant behaviour of her maid Evelyn (Chiara D’Anna) in sexually humiliating ways, a situation soon revealed to be mere role-playing. In reality, the two are a loving and committed couple trying to reinvigorate their relationship in scenarios which are controlled to the last detail by Evelyn, though beginning to lose their appeal for Cynthia.

Imbued with a playful kinkiness, The Duke of Burgundy confirms Strickland’s singular skills as a filmmaker.

Celebrating the release of The Duke of Burgundy, we have a fantastic cinema bundle to give away to one lucky winner – to enter our competition, simply answer the question below & enter your details before 11am on Monday, February 23rd!

In the film, Cynthia’s pleasures and restraints are metaphorically represented by her hobby. What does she collect? Need a hint? Watch the film trailer below.

Competition closes at 11am, Monday, February 23rd 2015. The winner will be contacted by email shortly after. (See IFI Terms and Conditions regarding prizes and competitions.)