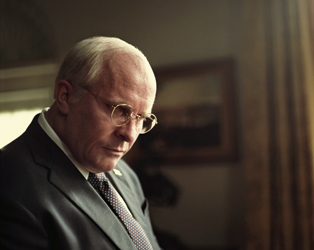 This film was released on Friday 25th  January 2019 and is no longer screening.

AWARDS WATCH: Golden Globe for Best Actor in a Musical or Comedy for Christian Bale, Oscar winner for Best Makeup and Hairstyling.

Adam McKay follows The Big Short, his 2015 film on the recent global financial crisis, with this loose biopic of former U.S. Vice-President Dick Chaney. Utilising similar formal and stylistic tics as his previous film, such as frequent breaking of the fourth wall and the unconventional use of cameo appearances, it stars Christian Bale in a typically committed performance, with fine support from, amongst others, Sam Rockwell, Amy Adams, and Steve Carell. From his ne’er-do-well beginnings to his rise through Washington power circles, it is an entertaining recounting of events, careful not to characterise its subject as a villain while never erring into making him an overly sympathetic figure.