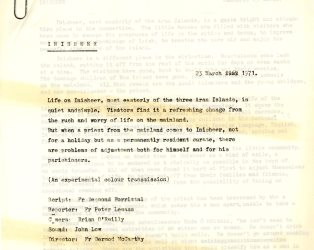 The Radharc Film and Document Collection

Extent of the collection

The Radharc collection is one of the most important and substantial bodies of work held by the IFI Irish Film Archive. The collection totals some 2,340 cans and 2,093 broadcast quality tapes that were transferred from founder/director Fr. Joseph Dunn’s house to the climate-controlled vaults of the Archive in Temple Bar in 1998. The material acquired comprises the various preservation elements required to produce a finished documentary, including soundtracks, voiceovers, sound effects, off cuts, final mix negatives, cutting copies and final prints, with copyright in the films shared between the Radharc Trust and RTÉ.

As well as preserving Radharc’s film collection, the IFI Irish Film Archive is custodian of Radharc’s extensive paper collection. The collection, contains all production files and newspaper clippings associated with Radharc’s body of work. This equally important collection gives us an insight into the development of each documentary. Annotated first drafts, shot lists, cue sheets, promos, transcripts – sometimes of interviews that were not broadcast , press releases and invoices that shed light on the mechanics of the productions. The collection also indicates the amount of pre-production work required and the range of reading and meticulous research that went into each production.

Value of the collection

The value of the Radharc collection is not just in the extent and variety of the material it contains, but also its quality. The team made over 400 documentaries between 1961 and 1996 displaying the type of insightful and challenging filmmaking that would garner them many critical accolades. They were not afraid to tackle difficult and often controversial topics and their standing as clergy allowed a level of access that a team of lay filmmakers may not have been able to achieve.

The Radharc series had a remarkably broad reach both geographically and thematically. In terms of content there is no other indigenous television series to match its importance. Radharc documentaries reflected the interest the team took in national and international issues; with Fr. Peter Lemass in front of the camera, Fr. Dunn directing and Fr. Forristal as writer, diverse (and often contentious) indigenous topics were tackled, for example, Open Port (1968) looking at prostitution in Cork, Young Offender (1963) the first film from within an Irish prison – The Road to Nowhere (1971) – about young people and drugs and Dying for a Drink (1983) a harrowing drama about alcoholism. Their international output was equally varied as the team covered five continents including North and South America, Africa and Asia in search of globally significant subject matter. Over 130 documentaries were made dealing with non-Irish issues, often made in circumstances of extreme discomfort or danger. The struggles of developing countries was examined in films such as Night flight to Uli – Famine in Biafra (1960), Cuba – Land of Hope and Glory (1986), Guatemala – Where the Pope is a Communist (1984) and Life and Death in Bali (1980). Often the Radharc coverage of international events provided an introduction for Irish audiences to the topics that they covered, enhancing the Irish population’s knowledge of international affairs and introducing them to a range of thought provoking subjects.

The Radharc collection is unparalleled in the canon of Irish filmmaking due to its longevity and the breadth of the subjects it covered, but its value can be assessed on many different levels and it is a value that continues to grow with the passing of time.

We can judge the Radharc output not just for its place within indigenous and indeed international documentary production, but also as a cultural, social and historical document, capturing aspects of Irish life in the last decades of the 20th century, The Radharc cameras shone a light onto a changing Ireland and recorded values, rural and urban traditions and indeed topography that no longer exist. The team was fearless in questioning and discussing theological issues of the day and their coverage of politics and events of international interest from a unique perspective. The collection is still used on an almost daily basis with new filmmakers, students and researchers accessing the collection for their own work further evidence of the value and calibre of the collection as a cultural resource. The Radharc Trust continues to promote the ethos embodied by the Radharc team through screenings and educational work and through its biannual Radharc Awards, that recognise documentaries of outstanding quality, which address national or international topics of social justice, morality and faith.

Watch A Taste of Radharc:

Archive at Lunchtime: Radharc Collection: In August we continue our investigation of the Radharc Collection with a programme of FREE lunchtime screenings, featuring Christy Brown & Sunshine House (Programme 1); Inisheer (Programme 2); No Tea For Soldiers (Programme 3); and Dear Angela (Programme 4). See our Weekly Schedule for times & details. BOOKINGS: Simply book your FREE seat by contacting the IFI Box Office on 01 679 3477 or emailing boxoffice@irishfilm.ie.