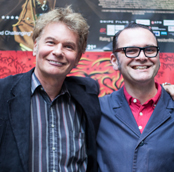 We were delighted to welcome to the IFI, director Julien Temple, to talk about his film The Ecstasy of Wilko Johnson at a special preview screening hosted by Michael Hayden (IFI Head of Programming) on Tuesday July 21st. Listen Below!

About the film
When it was announced that the great guitarist Wilko Johnson was suffering from pancreatic cancer, the outpouring of emotion from the music industry and fans was palpable.With Dr. Feelgood, Wilko had been a key figure in British rock of the 1970s, bridging a gap between 1960s R&B and the punk movement. Johnson’s pudding bowl haircut and vibrant stage antics marked him out as an icon of the era, an inspiration for followers such as Paul Weller, John Lydon and many others. Then Johnson further announced he was not going to endure treatment for his illness, and many anticipated the worst. Instead, Wilko threw himself into music, embarking on a farewell tour and collaborating with Roger Daltrey on an album that would get to number three in the UK charts. And he carried on living…

Skilfully weaving archive clips of performances and classic films, Julien Temple, who told the Feelgods story so brilliantly in Oil City Confidential, idiosyncratically celebrates Wilko as a shaman and a seer, a singular philosopher who accepts his own mortality with a great deal of nobility and, indeed, heroism. (Notes by Michael Hayden.)

The Ecstasy of Wilko Johnson opens on July 31st