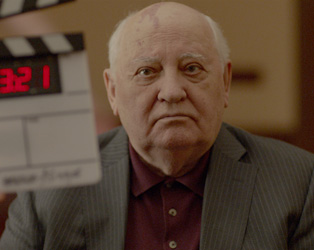 This film was released on Friday 8th November 2019 and is no longer screening.

Legendary director Werner Herzog (Grizzly Man, Fitzcarraldo) returns with Meeting Gorbachev, one of his most fascinating and moving films, an intimate portrait of a man who changed the course of history.

From a humble upbringing in a small village to General Secretary of the USSR, Mikhail Gorbachev brought about drastic changes that helped end the Cold War, bring down the Berlin Wall, and revolutionise politics in his home country and around the world. Now 87 and battling illness, the visionary leader has mellowed and slowed down. Still, gently but resolutely, he is pushing towards his goals.

Told through a series of interviews between Herzog and Gorbachev, and entwined with unforgettable archive footage, Meeting Gorbachev reminds us of the momentous and unforeseeable way the world can be changed.