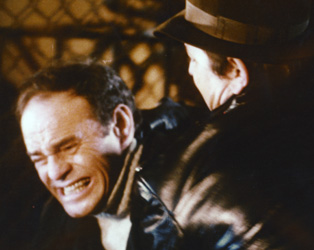 This film screened on 9th December 2018.

Polish science-fiction cinema suffered a great loss in August of this year with the passing of one of its foremost exponents, Piotr Szulkin, to whom the festival pays tribute with this rare screening of perhaps his most famed and critically dissected work. A reworking of H.G. Wells’s novel rather than a straightforward adaptation, it begins with Martian visitors being warmly welcomed by authorities, who use the media, and television in particular, to encourage the human populace in pursuing this benevolent relationship. However, this proves mere camouflage for the imposition upon the people of an increasingly authoritarian regime. An excoriating attack on Communist rule, the film’s examination of the political uses of mass media to influence and manipulate retains undoubted resonance for contemporary audiences.