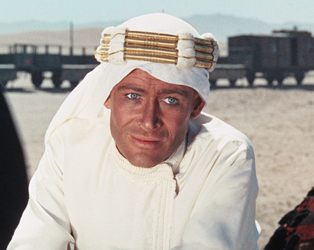 October 9th 2017: The Irish Film Institute, Ireland’s only screening house for 70mm prints, will screen David Lean’s 1962 epic Lawrence of Arabia in 70mm for ONE WEEK ONLY from Friday, October 20th. All tickets are on sale now – click here for more info.

The IFI is delighted to have the opportunity to screen David Lean’s Lawrence Of Arabia as it was meant to be seen, in 70mm, and from a brand new print.

Lean’s timeless epic, breathtaking in its scale and visual mastery, stars Peter O’Toole as British soldier T.E. Lawrence, who found his loyalties divided between his own army and the Arabic tribes with whom he becomes involved as they mount an uprising against Turkey. As critic Roger Ebert wrote, “you need to somehow, somewhere, see it in 70mm on a big screen. This experience is on the short list of things that must be done during the lifetime of every lover of film.”

These screenings of Lawrence of Arabia in 70mm follow the IFI’s record-breaking run of Christopher Nolan’s Dunkirk in July and August. Since the installation of 70mm projectors in the IFI in 2001, a number of films have been shown, including Vertigo, 2001: A Space Odyssey, Die Hard, The Hateful Eight and The Master.