Join us for the inaugural First Fortnight IFI Family event. This specially curated programme offers different stories of positive mental health through animations and live action short films. Dealing with school, friendship, bereavement,starting out or learning how to be your best, these terrific films from different countries will have you and your young viewers leaving with a smile.

The Pig on the Hill
Pig was used to living a peaceful and quiet life, alone on his hill. When a new neighbor, Duck, arrives, Pig is unsettled but slowly an unlikely friendship begins to take shape.
USA/2017/ Animation/Director: Jamie Wheless/ John Helms/Duration: 5mins 53secs

Dear Henri
Nine-year-old Henri has recently lost her beloved namesake and pen pal – Grandpa Henry. In her own imaginative way, she sends him messages and waits for a response. A sensitive film that combines live action and stop-motion animation to delightful effect.
USA/2017/Live Action/Director: Matthew Sandager/Duration: 12mins 37secs

Tråder (Threads)
A touching animated story on the bond formed between parent and child, and how growing up changes this relationship.
Norway/Canada/2017/Animation/Director: Torill Kove/Duration: 8mins 49secs

Departure
From award-winning studio Pink Kong comes this story of an Irish grandmother, Alma, who through a series of fortunate mishaps breaks free from her lonely life.
Ireland/2017/Animation/Director: Aoife Doyle/Duration: 9mins 15secs

Kuap
In a brightly coloured pool, a young tadpole begins to feel out of place when he fails to develop into a frog. Over the course of a year, the tadpole learns to accept himself and makes a few friends along the way, showing that everyone has their own pace.
Switzerland/2018/Animation/Director: Nils Hedinger/Duration: 7mins 37secs

Riceballs
After his Australian wife dies, Kenji attempts to cheer up his son by encouraging him to connect with his Japanese roots through food and the art of traditional cooking.
Australia/2016/Live Action/Director: Shingo Usami/Duration:10mins 19secs

Tokri (The Basket)
Set in India, this highly original claymation tells the story of a young girl, who after accidentally breaking her father’s pocket-watch, seeks to right this mistake by raising the money herself to repair it.
India/2018/Animation/Director: Suresh Eriyat/Duration: 15mins

Weeds
A flower must make a long trek across the hot pavement to get to a healthier garden so that it can bloom. A delightful short showing us how for many people, moving to a new place is necessary for them to flourish.
USA/2017/Animation/Director: Kevin Hudson/Duration: 2mins 48secs 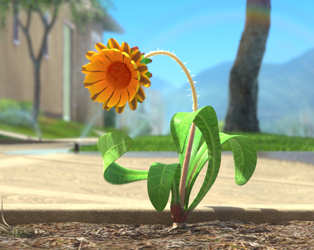