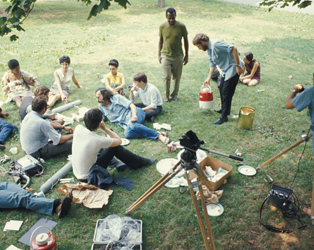 This film screened on 4th December 2019.

This screening will be introduced by comedian and theatre maker James Moran.

Symbiopsychotaxiplasm: Take One is a one-of-a kind documentary fiction hybrid. Directed by and featuring William Greaves, the film records Greaves as he loosely leads an increasingly perplexed film crew in New York’s Central Park as they try to ascertain what kind of film they’re making. A couple repeatedly enacts a break-up for a screen test, a documentary crew films a crew filming the crew, locals wander casually in and out of frame: Greaves’ film defies easy description.

Filmed in 1968, Symbiopsychotaxiplasm was a visionary experiment that remained unknown until the 1990s. Yet this wildly innovative, counter-culture landmark remains one of the most insightful films ever made about filmmaking.