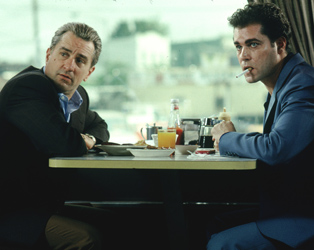 27 years on, there’s no denying that Martin Scorsese’s Goodfellas it not only a peerless example of the gangster genre but an all-out classic from one of the few remaining masters of cinema – we can’t wait to bring it back to the big screen from the 20th of January (book tickets).

And it was rightly feted on release back in September 1990, with a rapturous critical reception and almost $50 million in ticket sales. The film also got plenty of awards attention, including a Best Supporting Actor Oscar win for Joe Pesci as well as five BAFTAs and a host of critical nods.

But art is a subjective thing and universal praise is a hard thing to find, with even a movie titan like Scorsese earning a number of negative notices on release and in re-assessment over the years. Here are a few of the alternative perspectives on Goodfellas.

While Scorsese generates vivid images, he covered this ground in the superb Mean Streets in 1973. Here there’s nothing to learn, nobody to sympathize with [2014]
Ralph Novak
People Magazine

Scorsese’s style, fierce as it is, doesn’t accomplish what he clearly expected of it. Often, in many arts, fresh treatment can redeem familiar subjects, but it doesn’t happen here [Oct 22, 1990] The New Republic
Stanley Kauffmann

It seems these kinds of reviews will always surface, but the consensus still remains – 96% Fresh on Rotten Tomatoes and 89 on Metacritic. It’s quite simply a classic film which will endure for the ages, and one that demands to be seen on the big screen.

Goodfellas opens on the 20th of January 2017 at the IFI. Book your tickets here.