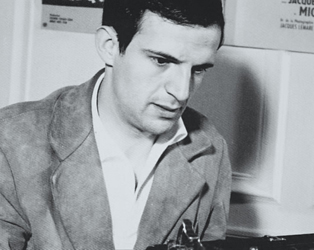 Antoine de Baecque has selected and will introduce films by Godard, Truffaut and Rohmer, directors synonymous with the Nouvelle Vague and each of whom was a film critic at Les Cahiers du cinéma.

He also introduces the documentary Two in the Wave (2011), a vibrant examination of the relationship between Godard and Truffaut, which he wrote and was directed by Emmanuel Laurent. The Nouvelle Vague was unleashed at the 1959 Cannes Film Festival with François Truffaut’s 400 Blows, a film which served as something of a manifesto. The revitalisation of filmmaking brought about by the Nouvelle Vague was inspired as much out of a love of cinema as that of literature.

We are delighted that Antoine de Baecque will share a one-hour conversation with Dr. Douglas Smith, Senior Lecturer, School of Languages and Literature, UCD on Saturday, November 22nd at 12.00. Free but ticketed.