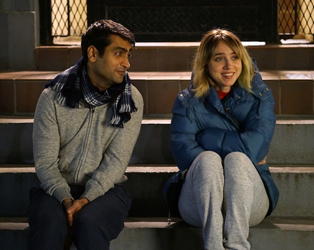 This film was released on Friday 28th July  2017 and is no longer screening.

The irresistibly sweet, charming, and very funny The Big Sick is written by Emily V. Gordon and Silicon Valley’s Kumail Nanjiani, and tells the story of their real-life romance and the difficulties it faced, which included the breaking of family traditions and a medically-induced coma.

Pakistani-born Nanjiani, playing himself, is a stand-up comedian in Chicago who is one night heckled by Emily (Zoe Kazan), with whom he soon begins a relationship. However, his traditional parents are intent on arranging a marriage for him. When Emily realises that his family know nothing about her, and that he can’t commit to a long-term future with her, she ends the relationship.

When she suddenly becomes seriously ill however, Kumail is drawn back into her life, meeting her initially hostile parents (Ray Romano and a wonderful Holly Hunter), and realising what he might lose.