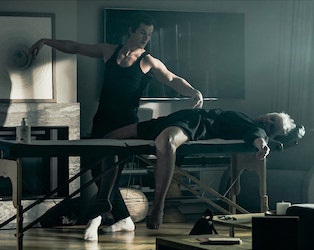 Małgorzata Szumowska, one of contemporary European cinema’s most consistently fascinating directors, co-directs for the first time with long-time collaborator Michał Englert, who has worked as writer and cinematographer on a number of her recent films, such as Body/Ciało (2015) and Irish co-production The Other Lamb (2018). In Never Gonna Snow Again, the Polish submission for this year’s Academy Award for Best International Feature, Ukranian immigrant Zhenia (Alec Utgoff) works as a masseuse in an affluent suburb. A transient presence in his clients’ lives, he is nonetheless treated as an intimate as he helps them with their personal issues. However, few show any interest in what lies behind his stoic façade, even as his talents seem occasionally to tip into the supernatural. The filmmakers present their accomplished and densely layered tale as a surreal fable, a cryptic satire filled with idiosyncratic humour.