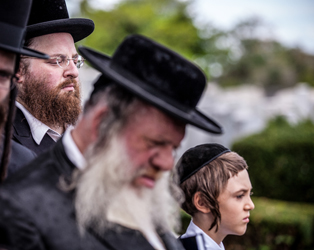 Life seems to be conspiring against Menashe, a kind-hearted if somewhat hapless grocery store clerk living in the Hasidic Jewish community of Brooklyn’s Borough Park area. Recently bereaved, he struggles to make ends meet whilst raising his young son Rieven.

The strictures of his religion call for children to be raised in dual-parent households and so, as a young widower, Menashe must remarry immediately. Railing against tradition, he sees it as his right to raise his son himself, an attitude that draws negative attention from community elders, especially the sage Rabbi Ruv who grants Menashe one week with Rieven to prove his parental abilities or else he will be forced to surrender custody to his apparently more reliable brother-in-law Eizik. This is his one chance to prove himself a suitable man of faith and fatherhood.