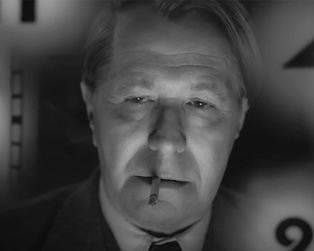 David Fincher’s mixture of love letter and poison pen letter to the Hollywood system of the 1930s and 1940s (perhaps perversely, made for Netflix) puts at its centre writer Herman J. Mankiewicz, best known today for his co-authoring with Orson Welles of the screenplay for 1941’s Citizen Kane (the only category in which it received an Academy Award). The film follows Mank (Gary Oldman), bedridden following an accident, and struggling with alcoholism, as he attempts to write the first draft of Kane. He is accompanied in his endeavours by secretary Rita (Lily Collins) and co-founder of the Mercury Theatre John Houseman (Sam Troughton). Incorporating flashbacks to Mank’s relationships with Marion Davies (Amanda Seyfried) and William Randolph Hearst (Charles Dance) that prove key to the development of Kane, this is a riveting depiction of the creative process sure to prove catnip to cinephiles.