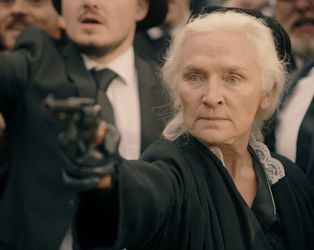 In 1926, 49-year-old Violet Gibson, daughter of the Lord Chancellor of Ireland, shot Italian fascist dictator Benito Mussolini in front of an adoring crowd in Rome. Her actions saw her imprisoned and interrogated before a deal was brokered by Mussolini and the British Foreign Office to have Violet committed to a lunatic asylum, a ‘mad Irishwoman’, and consigned to obscurity for the rest of her days.

Olwen Fouéré brings Violet Gibson to life, from her rejection of privileged Anglo-Irish roots to her emergence as a bold freethinker, committed to social justice and deeply opposed to fascism. It examines her 30 years in an English lunatic asylum as she petitioned Winston Churchill, Princess Elizabeth and others for her release, before dying alone in 1956. This Autumn, Dublin City Council unveiled a commemorative plaque honouring Violet Gibson in Merrion Square, a move that has generated worldwide attention.

The film will be followed by a Q&A with Barrie Dowdall (director) and Siobhan Lynam (co-producer).