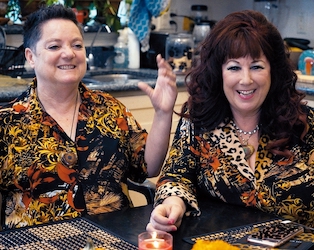 A lot can happen in 20 years. Monika Treut’s 1999 documentary Gendernauts followed a rag-tag group of gender renegades living in San Francisco, a haven for all letters of the LGBTQ acronym. Among the original film’s protagonists were Susan Stryker, Sandy Stone and Max Wolf Valerio, who return for Genderation, albeit older, wiser, more temperate and in a world they might not have expected.

These pioneers find themselves in a city that they can no longer afford to call their home: priced out by tech companies, famous local venues closed, a city now more catered to industry than art. Sound familiar? And filmed in the shadow of the Trump presidency, our protagonists have even more to worry about than just what to do as they reach pensionable age.

With Gendernauts referenced heavily in this film, there’s no need to worry that you’re missing out. An unexpected, thoughtful and poignant documentary, Genderation is also about the celebration of who you become with age and maturity. The flames may have dulled but that fire still burns.

Presented in partnership with Goethe-Institut Irland.