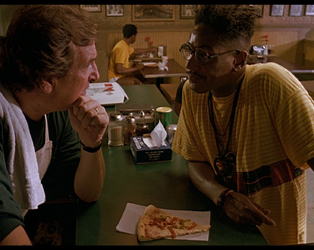 This film was released on Friday 2nd August 2019 and is no longer screening.

It’s the hottest day of the year in a predominantly black Brooklyn neighbourhood, and simmering racial tensions are about to reach boiling point. On the 30th anniversary of its release, Spike Lee’s incendiary third feature, a potent cocktail of visual bravado and barely suppressed anger, has lost none of its relevance and power to provoke.

Lee plays Mookie, a pizza delivery man for Sal (an Oscar-nominated Danny Aiello), who runs a restaurant with his sons, Vito (Richard Edson) and the unapologetically racist Pino (John Turturro). Local character Buggin’ Out (Giancarlo Esposito) is incensed when he notices Sal’s Wall of Fame exhibits only Italian-American celebrities. Demanding redress, he stages a boycott and the pizzeria becomes a flashpoint in a series of confrontations which escalate inexorably towards violence.