With the prestigious Palme d’Or at the Cannes Film Festival going to East Asia two years in a row, it is timely to consider some of the vast cinema output from the region that comprises Japan, Hong Kong, Taiwan, Korea and mainland China. Whether an approach is historical, stretching back to Japanese cinema origins in kabuki theatre, or generic, such as the evolution of the martial arts wuxia genre, any overview of East Asian cinema will yield a wealth of styles, and also richly moving family dramas and socio-cultural statements. A full film will screen each evening, followed by a talk from a different film specialist. The course will run on
consecutive Tuesdays, commencing at 18.30 unless otherwise stated. Order of screenings may vary slightly.

From Shaw Brothers, the legendary Hong Kong studio, and director Chang Cheh, comes one of their defining kung fu successes. Cheng Pei-Pei stars as Golden
Swallow, a woman having to choose between two swordsmen. Cheh’s artistry is evident in this film, shot on location in Japan, with stylish, fast-paced action.
Tara Brady, film critic with The Irish Times, will present Golden Swallow and talk about the martial arts genre, its lasting impact on both East Asian and
mainstream cinema.

Often described as the “most Japanese” filmmaker, especially when compared to Kurosawa or Mizoguchi, Yasujirô Ozu is also one of the most respected. When
Tokyo Story came first place in a Sight and Sound poll, it promoted reissues of Ozu’s other works too, including this one, which deals with familiar themes
of family ties, duty and love. Dr Till Weingartner (UCC) will consider Ozu’s films in the history of Japanese cinema, his deeply human stories and his lasting influence on other filmmakers.

Director Jia Zhangke gained recognition for work outside of the state subsidised industry, focusing on major societal changes in mainland China. Critiquing
the one-child policy amongst other issues, Jia built a reputation for an authentic Chinese cinema with his distinct style of long takes, colour and realism.
Dr Qĭ Zhāng, Assistant Professor, SALIS (DCU), will discuss Jia’s work as one of mainland China’s revered contemporary filmmakers.

From the 1980s, the cinema of Hong Kong yielded a new, stylised genre of action, effects and dizzying plots, with leading stars Chow Yun-Fat, Brigitte Lin and others. Jackie Chan perfected the stunt-driven, kung fu style, as seen in this rapid-fire comic thriller. Editor-in-Chief of Asian Cinema journal and lecturer,
Dr Gary Bettinson (University of Lancaster) will discuss the Hong Kong cinema heyday of the 1980s and early 90s, considering works of Jackie Chan, John Woo, and Stanley Kwan.

To watch a Studio Ghibli animation feature on the big screen is to enter a universe inhabited by plants, animals, mythical beings and, often, heroines navigating
their own way. Studio Ghibli frames are densely populated, as seen in this film, with gods, humans and forest animals fighting for a share of the world order.
Tomm Moore of Cartoon Saloon, director of Secret of Kells and Song of Sea, will talk about Ghibli and explain why this, his favourite film, inspires his work as one of Ireland’s leading animators. 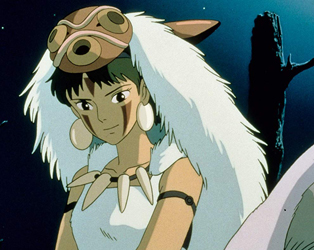