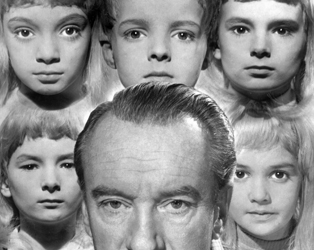 One night the inhabitants of the sleepy British town of Midwich fall mysteriously unconscious; two months later all women of childbearing age are discovered to be pregnant. The resultant children are identikit blonde cherubs that grow exponentially and appear to exhibit telekinetic and telepathic powers, which they use to manipulate and ultimately control the townsfolk.

Based on John Wyndham’s novel ‘The Midwich Cuckoos’, Wolf Rilla’s classic tale of an alien invasion by stealth was a huge hit in its day, spawning a sequel and a 1995 remake by none other than John Carpenter.