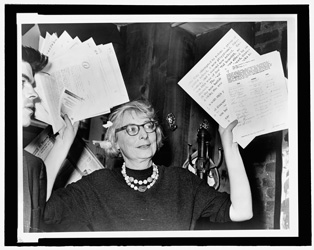 When journalist, author and activist Jane Jacobs wrote her seminal work, The Death and Life of Great American Cities in 1961, she helped to change the way we consider urban living; viewing cities as holistic networks of people functioning as distinct yet connected communities.

Diametrically opposed to her thinking was Robert Moses, the New York construction magnate who transformed the city after WWII by gutting its community-centric, poorer neighbourhoods to introduce monolithic rows of apartments. Focusing on the time in the ‘60s when they clashed over Moses’ plan to cut expressways through Greenwich Village, Soho and Little Italy. Matt Tyrnauer’s documentary presents these two figures as antagonists locked in a heated ideological battle for the future of New York.