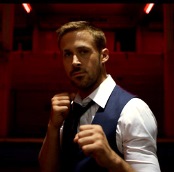 Blog: “I certainly think it deserves to be seen!” – Michael Hayden on Only God Forgives

Early reviews and reactions to Nicolas Winding Refn’s Only God Forgives were warning movie fans that the film is an extremely bloody and violently polarising ride. The IFI’s Wanna Fight? season is a selection of films, put together by IFI Head of Programming, Michael Hayden, to contextualise this controversial release. In his blog Michael explains his fascination with Nicolas Winding Refn’s film.

I came out of seeing Nicolas Winding Refn’s film Only God Forgives thinking it was something else, though I didn’t know what. I am familiar with Winding Refn’s films and I thought I knew what to expect, particularly when I found his previous film Drive  a parade of references, nodding to pioneering filmmakers like Michael Mann, John Carpenter and Walter Hill. Yet it wasn’t what I expected. The film surprised me, and I was drawn in by its sumptuousness, its elegance and its patience. I was seduced by it, while some of the other things that have been commented on (the mannered performances, the plot and particularly the violence) washed over me. In discussions about the film, I’ve noticed a tendency to focus on violence, perhaps given Winding Refn’s reputation. While I can’t say the film is devoid of extreme moments, I found it curiously restrained, particularly compared to Drive. Guts might spill, but heads don’t explode. Winding Refn has talked a lot about a desire to portray fantastical beauty in violent images and you only need to read recent interviews with him to realise that he relishes in provoking. I think he’s being a playful tease with Only God Forgives, giving the suggestion it is more violent than it actually is. That said, I couldn’t claim to definitively know what Winding Refn’s intentions are, and I retain some of the bemusement I had when I first saw it. I became ever more intrigued both by the film and the reaction to it, and that was the starting point for the Wanna Fight? season. It provided the opportunity to explore where Winding Refn might be coming from, and, beyond that, to present the film in a context unique to IFI.

Only God Forgives has attracted some vicious criticism, it’s true, though its supporters are also keen to be heard. I want to stand by the film, and certainly think it deserves to be seen. I would be keen to hear what IFI audiences make of it and of the season. I’m sure you’ll make your voices heard, too.

Wanna Fight?, a specially curated season of films to accompany the release of Only God Forgives, runs from August 3rd  to 31st. Only God Forgives is now showing at the IFI (August 2nd – 22nd).