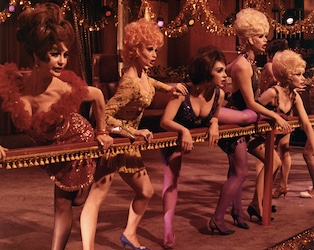 May 24th 2022: This June, the IFI celebrates the work of director Bob Fosse with an in-cinema retrospective. Starting as a dancer, Fosse became an influential figure in musical theatre and film, known for his star-studded choreography. All five of his feature films are presented in this retrospective. Tickets for Bob Fosse: It’s Showtime, Folks! are on sale now, with a full season pass available.

Bob Fosse (1927 – 87) was an iconic American actor, choreographer and filmmaker, who changed the way audiences around the world viewed dance on screen. The IFI is delighted to present this colourful, tuneful retrospective of Fosse’s films, June 9th – 30th.

Speaking about presenting this retrospective 50 years after the release of Cabaret, IFI Cinema Assistant Programmer Saidhbh Ní Dhúlaing said, ‘Bob Fosse was a prodigiously gifted, all-round entertainer, the likes of whom has seldom been seen. We’re delighted to offer IFI audiences the chance to see these films at their best, on the big screen, in all of their multi-faceted glory.’

Screening on Saturday 11th is musical masterpiece Cabaret (1972), with Liza Minnelli starring as Sally Bowles, the life and soul of every party. Fosse made history in 1973 as the first individual to win an Oscar, Emmy and Tony in the same year, winning the Best Director Oscar for Cabaret; a total of seven other Oscars were given to the film.

Lenny (1974), the biopic about pioneering comedian Lenny Bruce and his rocky road to success, screens on Wednesday 15th. Dustin Hoffman plays Bruce in a non-chronological look at his controversial life and career.

The semi auto-biographical All That Jazz (1979) starring Roy Scheider screens on Saturday 25th. Assembled with editing that brings the dancing alive on screen, Fosse dives into his own psyche, through protagonist Joe Gideon, and through stunning choreography performed by Ann Reinking, Leland Palmer, and Ben Vereen.

Rounding off the season is the rarely-screened Star 80, based on the murder of Dorothy Stratten, starring the stunning Mariel Hemingway. Screening on Thursday 30th, the stylish and brutal biographical drama examines the narcissistic spiral of Stratten’s husband Paul Snider.