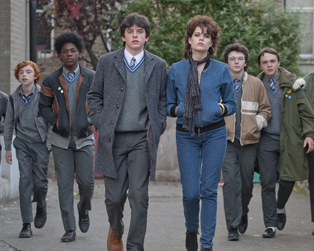 January 18th 2021: The Irish Film Institute is delighted to announce the launch of a newly-curated collection on its video-on-demand platform IFI@Home. GROWING PAINS is a new selection of films from Irish directors that focus on coming-of-age stories. Although adolescence is a common thread through all the films, they straddle a wide variety of genres and styles, and tackle topics such as teenage pregnancy and mental health.

Speaking about this new collection, IFI Head of Irish Film Programming Sunniva O’Flynn commented, ‘At a time when young people are being asked to show greater versatility and fortitude than ever before, we hope that this feature film collection, with its young cast navigating the perilous waters of looming adulthood, will provide inspiration or perhaps just much-needed distraction. It’s wonderful to find new audiences for this powerful body of contemporary work on IFI@Home.’

In Michael Inside, an impressionable 18-year-old is caught holding drugs for his friend’s older brother and is sentenced to three months in prison. Director Frank Berry workshopped the film with former prisoners to create a harrowing and starkly authentic picture of young people caught up, with bleak inevitability, in a cycle of crime and incarceration. The film is distinguished by two extraordinary central  performances from Dafhyd Flynn and Moe Dunford.

Kissing Candice, the atmospheric and dynamic feature debut from  director Aoife McArdle, tells the story of 17-year-old Candice (Ann Skelly) who lives in a gloomy northern border town beset by gang violence. A sufferer of chronic epileptic seizures, Candice has recurring visions of enigmatic young Jacob (played by Ryan Lincoln), a figure both alluring and frightening, who bears a striking resemblance to a member of the vicious local gang.

Set in the seaside town of Laytown, Morgan Bushe’s The Belly of the Whale focuses on teenager Joey Moody (Lewis MacDougall, A Monster Calls) as he returns home in a bid to reclaim his family’s caravan park and salvage his friendship with his best friend and drinking partner Lanks (Art Parkinson). In an effort to escape their bleak reality, they concoct a slapdash plan to rob the nearby amusement arcade with local man Roland (Pat Shortt).

Tom Ryan’s Twice Shy is a modern, coming-of-age drama that revolves around a young, unmarried couple who set off on a road trip from Nenagh to London to deal with an unwanted pregnancy. Revealing the tentative and tender nature of their young relationship, their intense journey is interwoven with flashbacks to happier, simpler times. Twice Shy features sensitive and natural performances from Shane Murray Corcoran and Iseult Casey with assured support from Ardal O’Hanlon.

Set in the recession-hit Ireland of the 1980s, Sing Street follows Conor (Ferdia Walsh-Peelo) who is forced to transfer from his private school to a less affluent institution in Dublin’s Synge Street. Working on relationship advice and musical cues from his older brother (Jack Reynor), Conor forms a band to attract a sophisticated older woman who he persuades to appear in a series of music videos. Director John Carney presents a pitch-perfect reconstruction of Dublin teen life in the 1980s with an irresistible accompanying soundtrack.

In Hugh O’Conor’s wise directorial debut Metal Heart, twin sisters Emma (Jordanne Jones) and Chantal (Leah McNamara) are worlds apart. Emma is self-conscious, and unsure of which path to take in life. Chantal, meanwhile, is beautiful, confident, and knows exactly where her life is headed. When their parents go away for the summer, their simmering sibling rivalry threatens to boil over, especially when the mysterious next door neighbour (Moe Dunford) moves back in.

Peter Foote’s The Young Offenders, the film which spawned the popular TV series, thrust Cork youth culture into the spotlight in this warm and funny feature inspired by the true story of a €440 million cocaine seizure off the coast of Cork in 2007. Cork city teenagers Conor (Alex Murphy) and Jock (Chris Walley) embark on a 160km road trip to the wilds of West Cork on stolen bikes in the hopes of finding an unrecovered bale of cocaine.

In I Used to Live Here, the collection’s second film from director Frank Berry, Jordanne Jones plays Amy, a 13-year-old living in Tallaght who takes on responsibility for running the family home after the death of her mother. When news breaks that a local boy has killed himself, there’s an outpouring of grief in the community that has a profound effect on Amy and the young people around her.