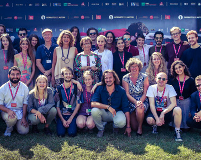 Are you a film buff? Do you enjoy sharing your love of movies with others Would you like to attend the Venice Film Festival? Here’s your chance to be part of this year’s 27 Times Cinema!

Co-organised with the LUX Prize (European Parliament) and Giornate degli Autori for 10 years now, it is hoping to run this great initiative again this year, which will turn the dream of 27 young European moviegoers to attend the Venice Film Festival into reality! They will constitute the Giornate degli Autori Jury and award a Prize to the best film of this dynamic and diverse selection. Moreover, as of this autumn, they will be actively involved in promoting a new LUX Prize European Audience film award by the European Parliament and the European Film Academy.

This video will help judges to see how a candidate expresses himself/herself in English and his/her ability to “talk” about cinema. High quality and creativity are required!

– Videos have to be shot in English,

– The following information should be visible on the video: Name and country of origin,

– The videos should be sent to IFI via WeTransfer.

What happens if you’re the lucky one?

You win a flight ticket to Venice and get free accommodation in the Lido where the festival takes place. You’ll be offered a free festival accreditation (giving also priority access to the Giornate degli Autori screenings).

If successful, you will be required to:

*Co-organised by the European Parliament, the LUX Prize, the Giornate degli Autori and Europa Cinemas, 27 Times Cinema aims to promote shared values and cultural diversity through cinema among young people.