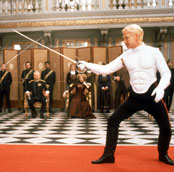 IFI presents Shakespeare Lives, a season of Shakespearean film adaptations in June to mark the 400th anniversary of the Bard’s death

The Irish Film Institute to present a season of films throughout June marking the 400th anniversary of Shakespeare’s death, in partnership with British Council.

From June 8th to 30th, the IFI will present a season of Shakespearean film adaptations, including Kenneth Branagh’s Hamlet on stunning 70mm, a family screening of The Lion King and an open-air screening of Much Ado About Nothing, as well as host a panel discussion on the topic of adaptations for stage and screen, as part of global commemorations marking the 400th anniversary of the death of the actor, poet and playwright, William Shakespeare.

Orson Welles’ Chimes at Midnight kicks off the season on June 8th, with Welles himself playing the part of Sir John Falstaff, the “abominable misleader of youth” who is friend to Prince Hal (Keith Baxter), heir to the throne. An abridged compilation of both parts of Henry IV, with some scenes from Richard II and Henry V, and text from The Merry Wives of Windsor, their troubled relationship plays out against the backdrop of a country at war in a film Welles regarded as his personal favourite.

The setting is Padua in Italy in the late 1500s in the first of two Franco Zeffirelli-directed adaptations: The Taming of the Shrew (June 12th). The rich merchant Baptista Minola (Michael Hordern) is attempting to marry off his two daughters and will only part with his youngest, the sweet natured Bianca (Natasha Pyne), if he can find someone who is up to the task of marrying his eldest, the formidable, ill-tempered Kate (Elizabeth Taylor). Enter lusty nobleman Petruchio (Richard Burton) . . . Romeo and Juliet has always been one of Shakespeare’s most popular plays with cinema audiences and Zeffirelli’s version – screening on June 25th – remains one of the most acclaimed. The first film to cast as leads actors close to the (speculative, in Romeo’s case) ages of the play’s protagonists, it was enormously successful on release, and is currently the last Shakespeare adaptation to have been Oscar nominated for Best Picture.

IFI audiences will have a rare opportunity to experience Kenneth Branagh’s epic unabridged version of Hamlet on 70mm, as the director intended, on June 15th. Contemporary cinema’s most noted interpreter of Shakespeare, his decision to shoot entirely on this glorious format adds to the huge scale of the production, and allows him to create a uniquely visual take on the material and perhaps represents his crowning achievement.

On June 17th, Shakespeare (and Branagh) fans can immerse themselves furthermore, in a magical midsummer’s evening in Temple Bar’s Meeting House Square before an open-air showing of Much Ado About Nothing, the director’s mischievous adaptation of the Bard’s comedy wherein the defiantly single Beatrice (Emma Thompson) and Benedick (Branagh) find themselves unwittingly thrust together through the machinations of a younger newly wedded couple. The night kicks off at 20.30 with pre-screening entertainment, including pop-up Shakespearean performances and a succulent pig on a spit from The Hogfather before the film itself screens at 22.00, when the sun goes down.

A key film in the New Queer Cinema movement of the early ‘90s, and a landmark of American independent filmmaking, My Own Private Idaho (June 18th) is in part based on Shakespeare’s Henry IV Parts 1 & 2. Van Sant fuses the story of disaffected young gay hustler Mike (River Phoenix), who suffers from narcolepsy, with that of rich kid Scott (Keanu Reeves), who is idling away the time until his 21st birthday and the sizeable inheritance that will come with it, a character specifically based on Shakespeare’s Prince Hal.

The season continues with Derek Jarman’s interpretation of Shakespeare’s final play, The Tempest (June 19th), an evocative depiction of colonialism, revenge, retribution and reconciliation. Starring Heathcote Williams as Prospero, the former Duke of Milan, and Toyah Willcox as his daughter Miranda, Jarman brings a punk sensibility to this production, with wild visuals and rich designs which conceal the film’s modest budget. In Tom Stoppard’s Rosencrantz and Guildenstern Are Dead (June 22nd), two minor characters in Hamlet are placed at its centre, wandering in and out of events at Elsinore, and seemingly unaware of their roles in the larger drama as they muse on their own concerns. Irreverent and witty, it’s an ingenious take on the original play from Stoppard (co-writer of the Oscar-winning screenplay for Shakespeare in Love).

Throughout June, the IFI will also host free programmes of short archive films celebrating both the Bard’s quatercentenary and Bloomsday in its Archive at Lunchtime strand, and on June 25th, it will welcome Dr. Sam Slote, Joycean Scholar and Associate Professor of English in Trinity College, Dublin, who will explore James Joyce’s relationship with the work of Shakespeare in an introduction to the Archive at Lunchtime Double Bill at 13.00.

Younger audiences can also take part in the commemorations when Simba the lion cub returns to the big screen in the classic animation The Lion King (June 26th), which was inspired by one of his best-known plays, Hamlet, showing as part of the IFI Family Festival (June 24th – 26th). Children can join RTÉjr’s Clara Murray before the film, sing along with some of the hits, and find out exciting Shakespeare facts in the pop-up Shakespeare corner.

As the curtain comes down on the season, Shakespeare fans will have a chance to discuss stage and screen adaptations with a panel of special guests following Roman Polanski’s Macbeth (June 30th). As the first film Roman Polanski directed following the horrific murder of Sharon Tate, his pregnant wife, at the hands of the Manson Family, it is not surprising that his treatment of Macbeth is particularly dark and brutal. It is also powerful and undeniably cinematic, full of sound and fury, all of which is significant in one of the most singular of Shakespeare adaptations. The panel following the feature will consider the use of language and context in adaptations for stage and screen, and will include: Theatre Director Selina Cartmell; Abbey Theatre Education Manager, Phil Kingston; actress Karen Ardiff; and lecturer Dr. Jane Grogan.

Outdoor Screening: MUCH ADO ABOUT NOTHING (Kenneth Branagh) June 17th (20.30)