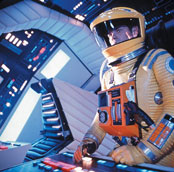 The Irish Film Institute presents FUTURES PAST, a season of classic science-fiction films to be introduced by guest scientific speakers, throughout April at the IFI and in partnership with Science Gallery at Trinity College Dublin.

The Irish Film Institute will present FUTURES PAST, a season of classic science-fiction films paired with scientific experts, who will speak about how cinema of the past has imagined our future with themes from climate change and space travel to nanotechnology and eugenics, in partnership with Science Gallery at Trinity College Dublin, and running from April 6th to 27th.

From the earliest days of cinema, filmmakers have used the medium as a tool for prediction and social commentary, exploring contemporary anxieties through visions of often dystopian futures. The films chosen for this season speak to social, political or geographical debates as part of their speculative futuristic narratives. The issues they raise, such as population growth, ecological destruction and climate change, pressing in their own time, are now matters of great global concern. FUTURES PAST aims to assess just how prescient these filmmakers were, to explore the accuracy of their visions, and to take the measure of how relevant the themes expressed remain today.

David O’Mahony, Head of IFI Cinema Programming, said: “Since the early days of cinema, filmmakers have looked to scientific achievements as inspiration for their speculative fictions. The films in the FUTURES PAST season, intended by their makers as social commentary on their own time, are visionary glimpses of where the human race might ultimately end up. We’re thrilled to partner with Science Gallery Dublin to explore the issues raised by these filmmakers, the accuracy of their predictions and their relevance today.”

Lynn Scarff, Director of Science Gallery Dublin, said: “Great movies captivate, they make you lose track of time and propel you to another place. Science Gallery Dublin is delighted to partner with IFI on this series – it’s a fantastic opportunity to bring together creative minds from a variety of disciplines to discuss how speculative science fiction in film has enabled us, as viewers, to try on a range of speculative futures. Most of all it brings the compelling world of science and cinema together for an entertaining evening.”

Kicking off the season will be Val Guest’s apocalyptic disaster drama The Day the Earth Caught Fire (1961) which anticipates contemporary concerns about climate change, and will be discussed by Oisin Coughlan (Friends of the Earth) and Diarmuid Torney (Lecturer in International Relations at DCU) before the screening. A reporter uncovers that the Soviet Union and the US have detonated simultaneous nuclear bomb tests, the impact of which alters the orbit of the earth, disrupting climate conditions and sending the planet spiraling towards the sun.

The deep space travel of Kubrick’s 2001: A Space Odyssey (1968); screening from a glorious new 70mm print) now seems within grasp and on Sunday April 10th the IFI will welcome speakers Joseph Roche (former Mars One Candidate/Professor of Education, TCD) and Peter Gallagher (Professor of Astrophysics, TCD) to discuss the themes of space flight, living ‘off-earth’ and wormholes. Kubrick’s iconic masterpiece shows speculative sci-fi on a truly grand scale, with its inspired use of classical music and astonishing special effects, designed by Douglas Trumbull (Silent Running) and the film opens for a week from April 8th. A special IFI Explorers edition of this film will take place on April 13th where 15-18 years olds can pay just €3 a ticket to see this 70mm masterpiece.

The human race’s poor stewardship of the earth lends Silent Running (1972) the air of inevitability and Ella McSweeney (Presenter, RTÉ’s Ear to the Ground) and Yvonne Buckley (Chair of Zoology, Head of Biodiversity, TCD) will discuss topic of extinction before this screening. Special effects wizard on Kubrick’s 2001, Douglas Trumbull turned his hand to directing with this debut set in 2001 when all plant life on earth has become extinct and the last remaining specimens have been gathered on space freighters in orbit around Saturn until the time comes to return and reforest the earth. Freeman Lowell (Bruce Dern) is the resident botanist and when news comes from earth to destroy the greenhouse and return with immediate effect, Lowell is compelled to insubordinate action.

Overpopulation is the theme for discussion with chef, food blogger and scientist Claire Anne O’Keefe before Soylent Green (1973), Richard Fleischer’s clever blend of dystopian sci-fi and police procedural that also serves as a wakeup call for how industrialisation is impacting the planet. The year is 2022 and society is on the brink of collapse; runaway population growth has outstripped food resources and the world’s population survives on rations produced by the Soylent Corporation, whose latest product, the titular Green, is more nutritious than ever before, but what exactly is it? A murder investigation leads detective Frank Thorn (Charlton Heston) on a path to uncover the truth.

Shaun O’Boyle (Research Officer, Science Gallery Dublin and podcast producer) and Aoife McLysaght (Professor of Genetics, TCD) will discuss the problems with pursuing genetic perfection before a screening of Gattaca (1997), where success and failure are determined at birth and the bio-engineered occupy the highest societal rungs. Vincent (Ethan Hawke), born the old-fashioned way, and as such is an ‘In-Valid’, dreams of space travel but is forever thwarted by genetic inferiority. However, can he become ‘Valid’ if he uses the DNA of Jerome (Jude Law), a genetically perfect, yet paralysed, former swimming champion? A sci-fi thriller with ideas, Gattaca asks difficult questions about the fate of the individual in a highly regulated social order.

With nanotechnology now a reality, perhaps the advanced medical procedures of Richard Fleischer’s Fantastic Voyage (1966) are not as unlikely as they must have seemed in 1966. A brilliant scientist discovers the technology to miniaturise objects and, now in a coma having been attacked during a bungled smuggling attempt by the CIA, is injected with an atomic-sized crack team who have 60 minutes to destroy a blood clot near his brain. Claire O’Connell (The Irish Times) and Fergal O’Brien (Professor of Biomaterials, AMBER and RCSI) will discuss this film in the context of nanotechnology.

George Lucas’ debut film THX 1138 (1971) transposes the dystopia of George Orwell’s rubble-strewn 1984 to a pristine future of gleaming white spaces that are no less foreboding in their antiseptic glare. Set in 25th century when sex and emotion are outlawed, a drone, THX 1138 (Robert Duvall), feels love for the first time when his female roommate tampers with his dosage, and he is subsequently arrested for sexual perversion and drug evasion.

Regular IFI strands will also explore cinematic imaginings of the future, with Lynn Scarff, Director of Science Gallery Dublin introducing this month’s Bigger Picture presentation, Fritz Lang’s Metropolis (1926). Metropolis is a seminal, ground-breaking work whose images of a segregated dystopian cityscape in the 21st century, where workers toil underground and rulers dwell in luxurious skyscrapers, have left an indelible mark on popular culture.

For the IFI Family strand, what could be more apt than the Pixar vision in WALL-E? This waste-covered earth has been abandoned by humans and relies on robots to clean up the mess. WALL-E is going about his job when he comes across EVE, a reconnaissance robot who has been sent to earth to see if life is once again viable. Falling in love, the resilient robot protects her from a storm till the mothership comes to call her home…

The Hangover Lounge, the IFI’s monthly indulgent Sunday afternoon of brunch and a classic film, will present Things to Come (1936), a key work by William Cameron Menzies. Written by H.G. Wells, and based on his own story, the film is a visionary flight of imaginative fancy. Predicting a Second World War, the film posits 30 years of conflict and plagues, before a new era of peace and technological advancement dawns in the 21st century.