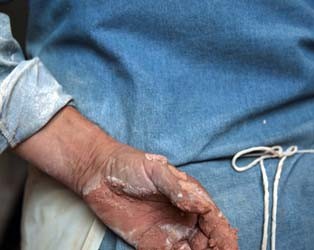 Francesco Clerici To Visit The IFI For Hand Gestures Q&A

In a foundry in Milan, a bronze sculpture is created. Francesco Clerici’s transfixing film shadows the craftsmen as they shape, knead, model, mix, repair, sand and polish, the final form of the piece tantalisingly coming into focus in what feels like real time. The technique they use is known as lost-wax casting, and it dates to prehistory – Clerici acknowledges the longevity of the tradition by interspersing archival footage of a similar casting, filmed at the same Milanese foundry decades ago. We have grown accustomed to documentaries that tell us what to think and feel, but Clerici wisely eschews voiceover or other such descriptive devices, favouring an observational approach that draws the viewer into the world of the sculptors; watching Hand Gestures, one feels as though we are participating in the creation of a work of art.

Tickets for this screening + Q&A are available now from the IFI Box Office on 01 679 3477 or online at www.ifi.ie. Tickets for the film’s IFI release from November 24th will be available from Monday 24th November.

For interview requests with Francesco Clerici, images and further details please Michelle McDonagh at the IFI Press Office on 01 679 5744 or email mmcdonagh@irishfilm.ie.