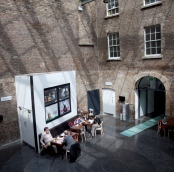 Guest of honour, writer-director Jacques Audiard and dates have been confirmed for the IFI French Film Festival 2015. The Festival will run from 18th-29th November and, in a new initiative in  partnership with access>CINEMA, will be touring highlights of the festival to selected venues nationwide.

This year’s festival is set to be one of the most hotly anticipated events in Dublin’s cultural calendar with the announcement today that one of France’s most important and popular writer-directors, Jacques Audiard, will visit the festival. The recent success at Cannes caps two decades of extraordinary achievement for Jacques Audiard. The Festival will incorporate a retrospective of his work including Read My Lips, See How They Fall, A Self Made Hero and the international hits The Beat That My Heart Skipped, A Prophet, and Rust and Bone.

Ross Keane, Director of the IFI, said “We’re delighted to be able to announce the first of many special guests at this year’s IFI French Film Festival. It is testament to the international recognition of our Festival that we are able to attract guests of the calibre of the Palme d’Or winner, Jacques Audiard. We’re also particularly pleased to be able to achieve one of the strategic priorities of the Festival through our nationwide tour of programme highlights to five key venues around the county. The Festival continues to go from strength to strength, and the 2015 edition is shaping up to be one of our best yet.”

The IFI French Film Festival is the IFI’s flagship festival and this year’s edition is the 16th since its foundation. Previous Festivals have attracted some of the most distinguished names in French cinema including Juliette Binoche, Arnaud Desplechin, Jane Birkin, Anna Karina, Patrice Leconte, Jeanne Moreau, Nicolas Philibert and Agnès Varda. Countless important French films have had their Irish premieres  at the Festival including Michael Haneke’s Amour and Hidden, Nicolas Philibert’s Être et avoir, Jacques Audiard’s A Prophet, Jean-Luc Godard’s Socialism and Xavier Beauvoir’s Of Gods and Men.

The full Festival programme and the touring schedule will be released and tickets will go on sale in early October 2015. For more details and updates see www.ifi.ie/frenchfest