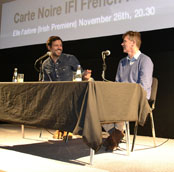 Listen to interviews and talks with our special guests at this year’s Carte Noire IFI French Film Festival!

Director Pascale Ferran interviewed after the screening of Lady Chatterley on November 23rd, 2014

A Q&A with actor Laurent Lafitte after his film Fool Circle on November 27th, 2014

Director Cecile Telerman interviewed about her latest feature, The Yellow Eyes of the Crocodiles by Irishfilminstitute on Mixcloud