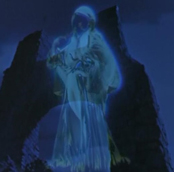 The IFI celebrates this Halloween season with many enjoyable blood-curdling events including the ever-popular IFI Horrorthon (October 23rd – 27th), an IFI Family screening of The Little Vampire (October 26th) and an opportunity to see the reissued 1956 classic Invasion of the Body Snatchers on the big screen (October 31st – 6th November). The focus of this month’s blog from the IFI Irish Film Archive’s Tiernan MacBride library is on films which have explored Ireland’s paranormal elements using supernatural entities ranging from apparitions to zombies.

This independently made mockumentary tells the story of working class Irish parents whose son Billy becomes infected by a zombie virus. The film weaves together scenes of visceral horror with moments of tenderness involving Billy’s parents, who are determined to protect their son despite the angry protests of their neighbours. Director Bing Bailey was inspired by the social commentary in George A. Romero’s zombie films [1]; issues such as economic decline and media intrusion are seriously explored here but the dark humour of the film comes into play as zombie marriage and veganism are discussed with tongue firmly in cheek. The film takes a unique look at zombie film conventions within an Irish setting, skilfully mixing comedy, drama and “impressively disgusting” [2] special effects together in a way that will delight dedicated horror fans. The Eclipse is a supernatural love story in which a man mourning the death of his wife experiences nightmarish ghostly visitations. This subtle film explores director Conor McPherson’s “sense of the mystery of existence” [3] and it is left to the audience to deduce the veracity of the apparitions. Using the gothic architecture of Cobh as a backdrop, the director builds a sense of foreboding which is further heightened by his use of dark interiors, creaking doors and unexplained noises. The naturalistic drama is shot through with shocking moments of supernatural horror which draw inspiration from films such as The Exorcist and The Shining. [4] The film garnered rave reviews when screened at the 2009 Tribeca Film Festival, with Variety declaring it a film of “seductive grace, humor and startling side trips into buttocks-clenching ghastliness.” [5] In this short film animator Naomi Wilson uses a large scale puppet in a real landscape to interpret the Irish legend of the cailleach, or witch, who must immerse herself in water every one hundred years to become young again. If she fails to do this in the early morning before she hears the bark of a dog or the chirp of a bird, she will perish. A scratched film effect draws us back into Ireland’s pagan past from where the piece explores the impact of Christianity and the industrial world on folk memory and on the cycle of nature. The film, produced under the Irish Film Board’s Gearrscannáin scheme, was shown at the Cork Film Festival in 2007 where it was pronounced “a haunting and visually stunning Irish myth delivered with humour, panache and a unique use of some lovely location work.” [6] The cailleach makes the journey to renew her youth in An Cailleach Bhéarra. Copyright 2007 Metropolitan Films.

The Faeries of Blackheath Woods (2006)

This brilliantly unsettling short film follows the nasty fate met by a young girl who encounters faeries in the woods. In less than four minutes, director Ciarán Foy delivers a “sharp little slap to the face” [7] to any viewer expecting sweetly sanitized fairies, encountering instead artist Olwen Foy’s Celtic sídhe-inspired faeries who are “suffering, ailing and grotesque.” [8] The arresting special effects, technical skill and assured style of the film won critical acclaim for its director and nine best short awards on the international film festival circuit in 2006 and 2007. Melissa (Katie Keogh) seals her fate when she traps and kills a faery in The Faeries of Blackheath Woods. Copyright 2006 Once Off Films.

This enjoyable Disney film follows the wily Irish rogue Darby O’Gill (Albert Sharpe) as he engages in a battle of wits with the King of the Leprechauns (Jimmy O’Dea) and, in a dramatic finale, fights to save his daughter’s life. Hailed by The Irish Times as “successful blarney” [9] on its release, the film was well received both in Ireland and internationally. Irish-American Walt Disney took a personal interest in the project, interviewing actors, [10] researching Irish legends with the Irish Folklore Commission [11] and attending the film’s world premiere in Dublin’s Theatre Royal [12]. Disney’s tendency to include a “touch of the grisly” [13] in its fairy stories is combined here with macabre Irish myths to terrifying effect. The appearance of a shrieking, wraithlike banshee in the film, followed by a thunderous death coach, is remembered by generations of terrified children even into adulthood, as evidenced by the Facebook page devoted to ‘people who have been traumatised by ‘Darby O’Gill and the Little People.’ The information in this blog is drawn from the IFI Irish Film Archive’s clippings, image, document and book collections. These collections contain thousands of files, images and articles relating to all aspects of Irish and Irish-interest film and television production. They are available to view in the Tiernan MacBride library within library opening hours, or by appointment with the IFI librarian. The Eclipse, An Cailleach Bhéarra and Faeries of Blackheath Woods form part of the Irish Film Archive’s Film Collections and they are available to view by appointment. Please direct all queries regarding the viewing of films to the IFI Irish Film Archive’s Moving Image Access Officer.