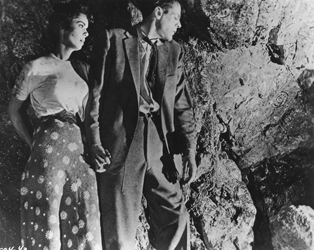 Hallowe’en at the IFI!

It’s that time of year again! Hallowe’en is just around the corner and do we have some gory treats for you to sink your teeth into this October. Check out the many brain-splattered, intestine-tangling and blood-curdling events that are taking place over the coming weeks…

As a warm-up for this month’s IFI Horrorthon, we present this late-night screening of horror-comedy Zombeavers, a very funny, very smart B-movie that keeps the laughs and gore coming in equal measure, with some unexpected developments along the way. BOOK NOW

It’s time to sharpen your fangs for our Hallowe’en screening, the story of young American Tony who moves with his family to Scotland. Lonely, he is looking for a friend who will bring adventure into his life. So when Rudolph the Vampire flies into his room, Tony takes off with him on a flying adventure. They join forces to fend off the vampire hunter and save the 300-year-old family. BOOK NOW

Before the film we will have a Parade of Vampires through IFI Foyer. Come in your favourite scary outfit and see if you can terrify us! We’ll be on the lookout for sharp fangs, stinking garlic, wooden stakes and scary fake blood!

One of the most evergreen of science-fiction films, Invasion of the Body Snatchers has been remade . Don Siegel’s masterful allegory for Cold War paranoia and the rise of McCarthyism in the U.S. has proved the most enduring. Still an effectively scary film, this is a welcome reissue for Hallowe’en. Join us for the opening screening on Hallowe’en night – October 31st. BOOK NOW

With Hallowe’en looming, IFI Irish Film Archive present two ghost stories produced by impresarios Micheál MacLiammóir and Hilton Edwards. Come along and catch one of these FREE lunchtime screenings, featuring Return to Glennascaul, introduced by Orson Welles, a story of an encounter with two ethereal women in the foothills of the Dublin mountains (Programme 1); and From Time to Time (aka A Stone in the Heather), framed by a fireside introduction from MacLiammóir, an eery tale, written by George Morrison (Mise Éire) which sees Maureen Cusack haunted by a War of Independence informer (Programme 2), with a Double Bill screening of both films every Saturday.

It’s back! IFI Horrorthon 2014 promises to be one of the terrifying vintages in its 17-year brain-splattered, intestine-tangling history. For five hair-raising days in the run up to Halloween there’ll be nowhere to hide from 38 features, many of them Irish premieres, make IFI Horrorthon by far the biggest and best gathering of horror film devotees in Ireland. More information available here.