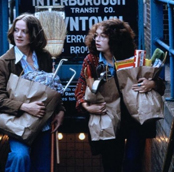 Beyond the Bechdel Test

The IFI’s Beyond the Bechdel Test season which runs throughout July with screenings, panel discussions and talks, picks up on a wave of concern about women’s representation in film that gained momentum when cinemas in Sweden started rating films against the Bechdel Test last year.

Proposed by American cartoonist Alison Bechdel, the Bechdel Test requires that a film include; 1) at least two female characters; 2) who talk to each other; 3) about something other than a man. When groups of films are measured against the Test, it regularly exposes an alarming shortage of films that investigate compelling relationships between women.This season presents a selection of films that explore relationships between women in depth and that engage female characters as the driving force in terms of narrative and plot.

One of the season’s highlights is a special preview and Dublin premiere of the superb upcoming romantic comedy Obvious Child (July 24th, 18.30) by Gillian Robespierre, about a girl on the rebound who accidentally gets pregnant. Lauded since its premiere at Sundance, its New York setting might remind the few who have seen it of another film focused on young female New Yorkers, Claudia Weill’s brilliant Girlfriends (1979) (July 23rd, 18.30), that was championed on its release by Stanley Kubrick and more recently by Lena Dunham.

Director Agnès Varda, a key yet under-acknowledged figure of the French New Wave, is featured with her sublime study of a singer whom we accompany around Paris while she waits for the results of critical medical tests in Cléo from 5 to 7 (1962) (July 13th, 16.10). Abbas Kiarostami’s Ten (2002) (July 10th, 18.30) also finds an interesting way of presenting a woman’s interaction with the urban environment, filming artist and writer Mania Akbari from the dashboard as she talks to her passengers whilst driving them around Tehran.

Yield to the Night (1956) (July 29th, 16.00), J. Lee Thompson’s female death-row drama starring Diana Dors was nominated for the Palme d’Or and received a screening in the House of Lords but has been unfairly neglected since. Another 50s film in the selection fortunately never suffered that fate, Joseph L. Mankiewicz’s brilliant study of female rivalry All About Eve (1950) (July 27th, 16.00) has bucked the trend for female-focused films and become an acclaimed part of the popular canon. Another well-known classic, this time from the Australian New Wave, is Peter Weir’s Picnic at Hanging Rock (1975) (July 6th, 16.05).

Introduced by Irish filmmaker Pat Murphy, Lizzie Borden’s Born in Flames (1983) (July 3rd, 18.30) is an exhilarating sci-fi that focuses on feminist factions in a future New York and will screen alongside Irish artist-filmmaker Jesse Jones’ Against the Realm of the Absolute . There will also be an Irish shorts programme Cinematic Voices, and an Artist Film Screening (July 15th, 18.30) which has been co-curated with Maeve Connolly of IADT.

In addition to screenings, there are a number of critical events that will promote discussion and feedback. There will be a panel discussion on Presence and Absence: Women in Contemporary Cinema (July 26th, 12.00) featuring Sinéad Gleeson, Roe McDermott, Pat Murphy and Rachel Lysaght. Prof. Diane Negra (UCD) will present an Afternoon Talk on The History of the ‘Chick Flick’ (July 12th, 12.00).

Many of the IFI’s regular slots are themed to tie in with Beyond the Bechdel Test. Ireland on Sunday, the IFI’s strand of new Irish work will look at Martina Durac’s Mairéad Farrell: Comhrá nár Chríochnaigh ( July 27th, 13.00); theWild Strawberries film club for the over 55s will feature Fried Green Tomatoes (1991) (July 25th & 30th, 11am); the Feast Your Eyes movie and meal event is Alice Doesn’t Live Here Any More (1974) (July 22nd, 18.15); and the IFI and Experimental Film Club will show Laura Mulvey and Peter Wollen’s Riddles of the Sphinx (July 30th, 18.30).

Film Correspondent with The Irish Times, Tara Brady will be running a two-hour workshop on the Bechdel Test and movie heroines for 9-12 year olds at the IFI Family Festival Girl See, Girl Do (alongside a specially selected screening of The Cat Returns).

This month’s From the Vault screening, showcasing work from IFI Irish Film Archive, is the hugely important Irish film Maeve (1982) (July 16th, 18.30), directed by Pat Murphy, which deals with life during the Troubles, but is careful to avoid the conventions of mainstream filmmaking. July’s Archive at Lunchtime will show a trio of films by Trish McAdam called Hoodwinked (throughout July, see website for times) that examine the role of women in Irish society.

Tickets for all the Beyond the Bechdel Test screenings and events are available now at the IFI Box Office in person, on 01 679 5744 or www.ifi.ie/bechdel.