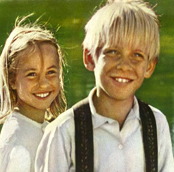 Mark Cousins’ new documentary A Story of Children and Film is released exclusively at the IFI today to wide critical acclaim. Following on from the popular The Story of Film: An Odyssey, the filmmaker and critic has created a companion piece full of his trademark passion and knowledge, as he examines the representations of children throughout the history of cinema using clips from 53 films from 25 countries.

One of the film’s most admirable qualities is the desire that Cousins’ instils in viewers to seek out the films it celebrates and, in response, the IFI is presenting a short Cinema of Childhood Season (April 12th-20th), presenting titles curated by Cousins and made available through Filmhouse and the British Film Institute in new digital restorations. The season reflects the documentary’s internationally focused selection, providing a rare chance to see these non-English-language gems on the big screen.

Children in the Wind at 14.00 on 12th April gives audiences an opportunity to experience a 1937 work of Hiroshi Shimizu, now little-known even in his native Japan but whose story of two young brothers in hard times charms and inspires, as the brothers retain their innocence and sense of wonder in a world of adult problems.

In Crows, Dorota Kedzierzawska 1994 Polish film screening on April 13th at 14.00, ten-year-old Crow feels unloved and unwanted; roaming the streets she attempts to find a playmate and a way to share her love by kidnapping three-year-old Malentswo. Crows shows with a short Danish gem Palle Alone in the World from 1949.

A glorious Swedish summer sets the scene for Hugo and Josephine on April 19th at 14.00 as the title characters befriend each other and explore the world around them, watched over by the benevolent gardener in a tender and strikingly shot film from 1967.

Scripted by Abbas Kiarostami who is no stranger to the world of children in his own films, Jafar Panahi’s 1995 debut feature The White Balloon on April 20th at 14.00 follows feisty seven-year-old Razieh, whose determination to go out and buy new goldfish for Iranian New Year leads her on a series of misadventures. Voted one of The Guardian’s best family films of all time, it’s an elegantly told tale of deceptive simplicity.

For more media information and images please contact Patrick Stewart at the IFI Box Office on 01 679 5744 or email pstewart@irishfilm.ie