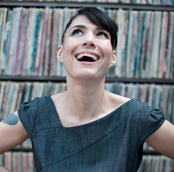 Since teddy boys ripped up cinema seats while Rock Around the Clock played over the credits for Blackboard Jungle there’s been a tension between film and rock ’n’ roll. But if you manage to crowd-surf over the titans of pop who’ve come a cropper when they’ve tried to act and the endless hagiographic documentaries that disappointed even the most ardent fans you’ll eventually land at a mosh pit of films that release the potential that melding rock ’n’ roll and cinema together always promised. March at the IFI is all about showcasing a selection of those gems, both classic and as-yet-unreleased.

It’s going to be a big year for music films at the IFI and this season has special previews of three of best music new releases that are coming down the tracks. It’s rare that you find a singer as smart, articulate and endearing as Kathleen Hanna (of bands The Julie Ruin, Bikini Kill, Le Tigre) but fortunately Sini Anderson’s portrait The Punk Singer (March 28th, 20.30) captures all those qualities and bears witness to her as an amazing performer as well – she’s a true original. A hit at Sundance, the Irish Premiere of Tim Sutton’s Memphis (March 25th, 18.30) shows mesmerising genre-hopping musician and artist Willis Earl Beal make his acting debut. And capturing the defiant spirit of youthful rock ‘n’ roll dreams, Lukas Moodyson’s Stockholm-based graphic novel adaptation We Are the Best! (March 29th, 18.30) completes this exciting trio of sneak peeks.

In the revolutionary year of 1968 The Rolling Stones were at a pivotal moment in their existence, at the height of their fame but about to say goodbye to Brian Jones, and Jean-Luc Godard was entering his most heavily political phase so it’s no surprise that their collaboration on Sympathy for the Devil (March 4th, 18.30) is one of the most interesting rock ’n’ roll films of the decade with fascinating footage of Jagger and Richards reworking and refining one of their greatest songs. Yet Sympathy for the Devil is just one example of The Rolling Stones’ extensive and rich filmography which will also be explored in a special illustrated talk earlier the same day (March 4th, 16.00) by Adrian Wootton, film critic and CEO of Film London, who is internationally renowned for his film talks presentations. A must-see event for Dublin’s many Stones fans.

Other season highlights include special guest, writer and Saint Etienne musician Bob Stanley, who will introduce to This is Elvis (March 8th, 16.00); Jimmy Cliff in a thrilling performance in The Harder They Come (March 12th, 18.15), a raw reggae epic of dreams, disappointment, and revenge; Derek Jarman’s glorious look at London punk Jubilee (March 17th, 18.30); and arguably the most influential of all rock ’n’ roll documentaries, Bob Dylan on the cusp of going electric in D.A Pennebaker’s Don’t Look Back (March 15th, 16.00), introduced by journalist Dave Fanning

Tickets are available now at the IFI Box Office, by phone on 01 679 5744 or online at www.ifi.ie/rocknroll.