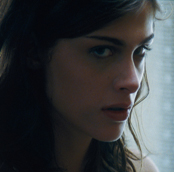 The surprise winner of Best Film at the Dublin Film Critic’s Circle awards at JDIFF 2013, Vanishing Waves returns to Dublin this December as part of the short IFI Lithuanian Film Focus running from 6th-8thDecember. Timed to coincide with Lithuania’s Presidency of the Council of the European Union this year, the programme reflects the diversity and strength, both in terms of style and content of the country’s film industry.

Vanishing Waves (6th Dec 6.15pm), which kicks off the weekend, is a sci-fi romance which draws on ideas and images reminiscent of Tarkovsky, Almodóvar and Michel Gondry. It’s an intense, erotically charged twist on the star-crossed lovers fable. Medical researcher Lukas, volunteers to take part in an experiment which aims to communicate with a young woman in a coma. The story convincingly generates a parallel reality which quickly begins to supersede Lukas’ own life. Director Kristina Buožyte will take part in a post screening Q+A.

Accomplished director Gytis Luksas’ most recent film Vortex (7th Dec, 1pm) is a convincing chronicle of the protracted and traumatic Soviet period of Lithuanian history. The story follows Juzik whose blissful early life in the countryside is ravaged by two tragic incidents. This powerful, elemental film unravels the cruel manner by which a corrupt system can impact the lives of its subjects.

Eastern Drift (8th Dec, 4pm) from masterly filmmaker Šarunas Bartas, is more structured than some of his award-winning previous work, with Bartas taking the lead role as a drug-runner struggling to ditch his life of crime and settle down with his French girlfriend. Full of great performances, the film retains the director’s talent for capturing a European underworld populated by those forever ignored by the mainstream.

Three different films of the past five years from directors of three different generations – It’s going to be an exciting weekend of Lithuanian cinema!

For more media information, interview requests with Kristina Buožyte and images please contact Patrick Stewart at the IFI on 01 679 5744 or email pstewart@irishfilm.ie.