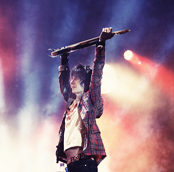 BOOK NOW! Special preview announced of Shane Meadow’s film on The Stone Roses, Made of Stone, on 30th May at the IFI

In 2012 a resurrection no one thought possible took place when legendary band The Stone Roses reformed after 16 years.

With unprecedented access to previously unseen archive footage, Made Of Stone is a revealing journey through the life of one of the most revered and influential bands in British music history.

Acclaimed filmmaker Shane Meadows brings his unique directorial style, humour and emotional depth to the film, capturing the band at work and in their everyday lives as they rehearsed for their much-anticipated reunion, which culminated in three triumphant homecoming gigs at Manchester’s Heaton Park in front of 220,000 adoring fans.

Incorporating never-seen-before material spanning the band’s musical history, the personal experiences of many of those touched by the band and their music, and unparalleled access to the record-breaking sell-out concerts which took place in Summer 2012, this is the definitive record of the definitive band of the past 25 years.

Book here for the special preview of the film with a satellite Q+A at the IFI on 30th May at 19.30