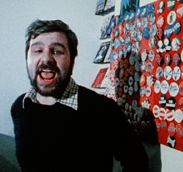 IFI celebrates the cinema release of the award-winning new film Good Vibrations with a special screening of two documentaries from the vaults of the IFI Irish Film Archive by John T. Davis, capturing the anarchic spirit of the 1970s’ Ulster punk scene at first hand.

Lisa Barros D’Sa and Glenn Leyburn’s Good Vibrations, one of the most hotly anticipated Irish films of the year and the winner of Best Feature Film at the Galway Film Fleadh 2012, is on release at the IFI and cinemas nationwide from Friday 28th March. Good Vibrations tells the remarkable true story of record store and indie-label owner Terri Hooley who, in the most unlikely surroundings of 1970s’ Belfast, created a now legendary alternative music scene. As The Troubles progressively shut down the city centre, Hooley opened Good Vibrations Records on the most bombed half-mile of road in Europe and Belfast received its own punk-rock revolution.

Featuring a breakthrough performance from actor Richard Dormer (Game of Thrones) alongside Killian Scott (Love/Hate), Liam Cunningham (The Wind that Shakes the Barley), Adrian Dunbar (Ashes to Ashes), and Dylan Moran (Shaun of the Dead), Good Vibrations is a must-see for anyone who remembers Rudi, The Outcasts or who has ever rocked out to The Undertones’ immortal Teenage Kicks.

Fans of the Ulster punk scene, will also be able to revel in a special one-off Monthly Must-See screening on March 30th  at 16.10 of two films from master documentarian John T. Davis that capture the scene during its heyday. Shellshock Rock (1979) mirrors the rough aesthetic of the punk-rock scene as filming took place in the Good Vibrations record shop, dingy bars and clubs. Bands featured include Protex, The Undertones, Rudi, The Outcasts, and Stiff Little Fingers. Self-Conscious Over You (1980) faithfully records the April 1980 concert at the cavernous Ulster Hall when Good Vibrations Records packed the place with 1800 people to enjoy The Outcasts.

Tickets are available NOW for the start of Good Vibrations  run at the IFI on March 29th and the Double-Bill Monthly Must-See screening ofShellshock Rock and Self-Conscious Over You on March 30th at 16.10 on 01 679 3477 or online at www.ifi.ie