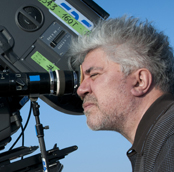 The films of Spain’s greatest living filmmaker, Pedro Almodóvar, are screening this April at the IFI alongside a satellite Q+A with the director at a special preview of his upcoming release I’m So Excited.

The IFI are celebrating the unique vision of director of Pedro Almodóvar with a season of his films from April 2nd-24th. Following the death of Franco in 1975, the ‘Movida Madrileña’heralded a counter-cultural renaissance celebrating hedonism, transgression, and above all, freedom of expression. Feverishly creative and consistently impressive, filmmakerAlmodóvar, has become the movement’s most celebrated almunus and a major figure in European cinema.

Almodóvar’s early work reflects the headiness of those post-Franco years. The films are riotous, slapdash, and frequently gaudy but set the rich palette of themes, styles and colours that have been evident throughout his career. Three of these early films are shown in this season; 1982’s Labyrinth of Passion, the story of Sexillia, pop star, nymphomaniac, and our heroine;Oscar-nominated Women on the Verge of a Nervous Breakdown, his international breakthrough from 1988, is a joyous sexy romp with an intricate plot; High Heels, made in 1991, is a more (though not entirely) straightforward mother-daughter melodrama and signposts his subsequent works’ greater emotional depth.

All About My Mother (1999) was a watershed moment for Almodóvar’s career. Its exquisite maze of plotlines, full of warmth and pathos, deservedly won the Oscar for Best Foreign Language Film. The film showed him refine his overall approach and perfect the manner in which he pays homage to other works in his films ( in this case a scene from John Cassavetes’ Opening Night), now a trademark of his style.

The films since All About My Mother represent a rich seam of form and are screening in the IFI’s season. Films such as Talk to Her (2002) and The Skin I Live in (2012) have shown the director create deeply transgressive stories about renegade medics, the blurring lines between hostage and patient and the nature of interior and exterior identity. Volver (2006) delves into the feminine world of small town Spain, creating resolute, witty and indomitable characters with which to explore sexual abuse, murder and terminal illness.

Broken Embraces (2009) and Bad Education (2004)both involve filmmakers at work, just one of the performance mediums such as theatre and dance that Almodóvar uses to reflect and examine the artistic process. They are fascinating studies of artists at work in films that are more like sprawling internal landscapes of the psyche and you can be sure, as always, nothing is even close to what seems.

It’s a group of films that have seen the director live up to his growing reputation as a world-class film auteur, whilst consistently connecting with international audiences including a large following among Irish filmgoers. A new Almodóvar is now a cinematic event and there’ll be no shortage of buzz around the special preview of I’m So Excited on April 23rd, ten days before its cinema release on 3rd May, including a chance to quiz the director himself, via satellite, in a post-show Q+A.

Women on the Verge of a Nervous Breakdown 8th April 18.30

Tickets are available for the Harmony Korine- Breaking Out at the IFI from Thursday March 28th on 01 679 3477 or online at www.ifi.ie