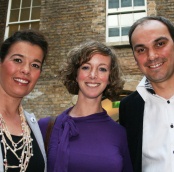 Director Ross Ashcroft at the screening of his award-winning documentary, Four Horsemen

We were delighted to welcome Director Ross Ashcroft and Producer, Megan Ashcroft, at the special screening of their feature documentary, Four Horsemen, here at the IFI on Monday, July 19th.

It’s been quite a week for the Director and his team, as the documentary received the Best International Feature Documentary award at the Galway Film Fleadh last weekend – congratulations!

The sold-out screening has been followed up by an insightful Q&A with the director and the IFI audience.

For more information on Four Horsemen, visit their website: http://www.fourhorsemenfilm.com