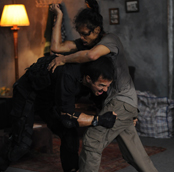 The Raid the much-hyped action and martial arts film, filmed in Indonesia by Welshman Gareth Huw, is finally out at the IFI. There’s been a deluge of enthusiastic reviews including FIVE-STAR reviews from The Irish Times, Hot Press, Film Ireland and The Guardian.

To celebrate The Raid‘s opening as the centrepiece of our Bang For Your Buck: Action Movies 101 Season, we’re asking you to submit your reviews of the film (max. 150 words) to irishfilminstitute@irishfilm.ie by midnight Wednesday 23rd May. The best one will have their review published on the IFI Blog. Alongside the bragging rights there’s also a The Raid original poster and a pair of cinema tickets as a prize. Full details of the competition can be found here.

Screenings will be selling out this weekend so make sure by booking your ticket now.