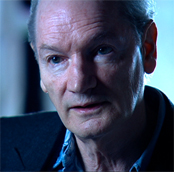 Barbaric Genius to tell the story of writer John Healy

Barbaric Genius, a new documentary on the life of John Healy, writer of The Grass Arena, to be released exclusively at the IFI from 25th-29th May 2012

Paul Duane’s feature documentary Barbaric Genius tells the story of John Healy – wino, chess prodigy, author of a classic memoir, and forgotten man. Once a media darling for his charisma and aura of violence, he’s spent the past twenty years living in extraordinary isolation, embittered and angry.

Healy was born into a London-Irish family during World War 2. Hounded by violence at home and on the streets, he took refuge in drink and spent the ’60s as a street wino and a mugger. Then, learning to play chess in jail, he became aware of his own potential.Sobering up, he went on the tournament chess circuit and caused controversy and sensation not only with his unbelievable ability, but also his volatile and sometimes belligerent personality.

As he began to realise his own formidable intelligence, he entered the world of literature with his 1989 memoir, The Grass Arena, and became a celebrity – and that’s when things started to go wrong…

Filmmaker Paul Duane says: “I had been a fan of the book on its initial publication, and had tried to buy the film rights in 1991. When John Healy re-surfaced after fifteen years of total obscurity, he agreed to take part in a film that would try to explain how he managed to go from the gutters of Camden to Hollywood, then back again, and what happened? How did he destroy his career, why were his books removed from the shops and destroyed?.”

This is a story that encompasses almost every aspect of the human spirit, from violent intoxication to transcendent spirituality. It also provides a remarkable picture of the hidden tensions in British life around class, privilege and education.

Barbaric Genius is presented by Screenworks in association with the  and RTÉ . Its cinema release has been supported by the Irish Film Board/Bord Scannán na hÉireann.

Tickets for this limited run are available now at the IFI Box Office on 01 679 3477 or www.ifi.ie

For more media information and requests for interviews with John Healy and Paul Duane please contact Patrick Stewart at the IFI Press Office on 01 679 5744 or pstewart@irishfilm.ie