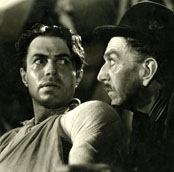 James Mason in Odd Man Out

In an outstanding performance which he himself considered the best of his career, James Mason stars as Johnny McQueen, an IRA fugitive, in Odd Man Out.  The film will be screened on 9th May at 6.30pm at the IFI as part of IFI Monthly Must-See Cinema that showcases films from the Irish cinema canon which are now preserved in the IFI Irish Film Archive.

Months of hiding out in a safe house have taken their toll on Johnny’s mental health and cause him to botch a bank robbery undertaken to raise funds for the IRA, a cause he passionately believes in. A cashier is killed and he sustains serious wounds, forcing him to stagger deliriously through the stow-filled streets of Belfast meeting a succession of people who help or hinder him as a manhunt gets underway.

Odd Man Out is remarkable in its sympathetic dramatisation of an IRA story for British and international audiences. A triumph of style from Carol Reed (who would make The Third Man two years later), it was deemed Best Film at the British Academy Awards in 1947. It features outstanding performances from its Irish cast: Cyril Cusack, Kathleen Ryan and the remarkable Abbey veteran, F.J. McCormick.

David Judge, the son of F.J McCormick, will introduce the film.