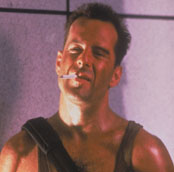 Bang for Your Buck: Action Movies 101

Get more bang for your buck in May with the IFI’s season of classic action movies including Terminator 2 (70mm), Die Hard (70mm), Robocop and First Blood

What defines an action movie? It’s a slippery genre and one that perpetually reinvents itself while sticking to a set of conventions we all know and love; never quite achieving a critical consensus of legitimacy and long may it remain so. Heaven forbid that action movies ever become respectable. This May the IFI is celebrating the excitement around the release of the award-winning The Raid on May 18th with a fast, furious and unashamedly fun season of some of the landmark films in one of cinema’s great genres.

The season kicks off with Sylvester Stallone, one of the genre’s most enduring stars in the first Rambo First Blood (May 1st). With less of the über-violence than its sequels, here Rambo is a real human in an intense psychological drama punctuated by brutally effective action sequences.

Two of the all-time action classics are being shown in glorious 70mm. First, perhaps the holy grail of action, a career-defining performance from Bruce Willis in John McTiernan’s Die Hard (May 6th) as ordinary-guy-in-extraordinary-circumstances John McClane, trapped in an LA skyscraper while Alan Rickman and gang take the employees hostage. After all the sequels, homages, pastiches and rip-offs, the original Die Hard feels fresher than ever. Secondly, James Cameron’s pumped-up classic Terminator 2: Judgement Day (70mm, May 20th) shows Arnold Schwarzenegger, at the height of his phenomenal box-office power, as a reformed bad robot sent back in time to protect mankind’s future saviour. A thrilling foretaste of the tech-driven spectacle flicks that shaped the future of the genre.

Many of John Woo’s ‘80s innovations in Hong Kong are now ubiquitous but there’s nothing quite like the work of the master himself. Hard-Boiled (May 2nd) is the most audacious and astonishing of Woo’s ‘bullet ballets’ and cops don’t come cooler than Chow Yun-Fat’s jazz-loving badass Inspector ‘Tequila’ Yuen. Far more subversive Asian action fare can be found in Kinji Fukasaku’s Battle Royale (May 5th). In a dystopian future this savage proto-Hunger Games sees island-bound youths battle it out in a deadly game, with TV audiences tuning in for the results.

Twenty-five years have passed since Paul Verhoeven’s sci-fi satire Robocop (May 27th) was made. Featuring the artistry of SFX legend Rob Bottin, this deeply sardonic cyberpunk riff on the life of Christ remains a heavy metal masterpiece. Another true one-off of the genre, The Matrix (May 19th) alluded to everything from Alice in Wonderland to Descartes but it’s the Zen cool of Keanu Reaves and the magnificent action sequence that sold it to global audiences and big screen viewing is essential.

If all that isn’t enough punch for one month there are also screenings of Sean Connery’s James Bond in Goldfinger (May 26th) and Jason Statham, a cockney Charles Bronson, chasing life-or-death adrenaline hits in Crank (May 3rd) . And that should be enough for even the most high-octane of action fans, for a few weeks at least…

Bang for your Buck: Action Movies 101 – The Schedule

For more information, images and requests for interviews with season curator Derek O’Connor please contact Patrick Stewart at the IFI Press Office on 01 679 5744 or pstewart@irishfilm.ie