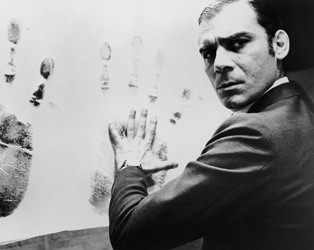 Volontè plays a respected police inspector who, at the outset, brutally murders his mistress then investigates the scene of the crime himself. Exonerating all potential suspects, he begins to plant ever-more obvious clues to his guilt – all of which are wilfully ignored by his fearful subordinates – to prove his untouchable status.