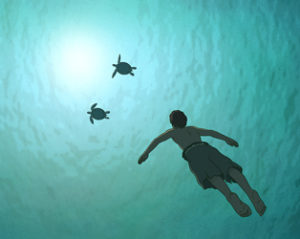 The first international co-production for Studio Ghibli, the world-renowned Japanese animation studio responsible for modern classics such as Princess Mononoke, Spirited Away and Ponyo, is directed by Michael Dudok de Wit, Dutch-British director of the Oscar-winning short Father and Daughter (2000). The exquisite beauty and profound simplicity of the results lend The Red Turtle the quality of an ancient fable.

The film opens with a ship on a stormtossed sea and a man thrown overboard into the crashing waves; castaway onto a deserted island, the unnamed protagonist is forced to subsist by whatever means he can, his only companions being a group of sand crabs. The man tries to make his way back to civilisation by building a raft, but his efforts are repeatedly thwarted by an enormous red turtle who destroys his meagre craft every time.