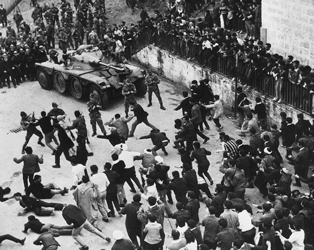 ANGER IS AN ENERGY: CINEMA OF PROTEST

Inspired by the volume and impact made globally by protest movements in recent years, this season takes a selection of feature films, from a range of time periods and national cultures, to examine how some of cinema’s most creative and daring directors have tackled and responded to sociopolitical dissent.

In the spirit of the revolts or unrest that they endeavour to represent, the films included here reveal a desire to question positions of power and authority. They do so often by challenging the perceived limitations of the form, by blending fact and fiction, as in Haskell Wexler’s Medium Cool, inventing ways to disrupt or subvert narrative structure as in Věra Chytilová’s Daisies, or by coming up with radical, new methods of registering censure, as in Jafar Panahi’s The Circle and Abderrahmane Sissako’s Bamako.

Different forms and approaches to the subject of protest are explored here – some are immense in scale and feature huge casts and elaborate choreography as in Eisenstein’s Strike and Pontecorvo’s Battle of Algiers; while other works such as No Regrets for Our Youth and La Chinoise focus exclusively on the ideas behind forces of change and as such become bigger than the worlds they represent.

In every case however, the impulse behind these films is the same: to use the camera as a political tool, to record an energy that might have an impact beyond the auditoriums in which they screen.

Look out for events and screenings – From the Vaults, Artist Film Screening, The Critical Take, Wild Strawberries and IFI Family – tying in with this season throughout August.