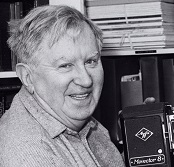 This is the second in a series of blogs about the Liam O’Leary Archive, a collaborative project between the Irish Film Institute and the National Library of Ireland. Catch up on part one of the blog here. MS 50,000/149/2 Photograph of Liam O’Leary from the Irish Film Society materials in the Liam O’Leary Archive.

A large section of the Liam O’Leary Archive contains the Irish Film Society (Cuman na Scannán) materials, which includes correspondence, photographs, administrative documents, reports, event information and materials relating to the various branches and committees of the Society. The materials are made up of almost 200 folders and 70 volumes charting the events and management of the Society. The IFI Archive also holds a complementary collection of documents relating to the Irish Film Society as well as holding many of the films produced by the Society. The roots of the Irish Film Society are in the Dublin Little Theatre Guild; founded in 1934 the Guild exhibited classic silent films (usually on 9.5mm) and held discussions on film production. In February 1936 the Guild’s exhibition of the Russian film Battleship Potemkin caused controversy and allegations of Communist propaganda, especially in the weekly newspaper The Irish Catholic.  After the controversy, the Irish Film Society was established by P. J. Fitzsimons, Sean O’Meadhra, Edward Toner and Liam O’Leary, who became its first directors. The Irish Film Society was launched with forty members in November 1936 and exhibited films in the Dublin Little Theatre Guild’s studio which, because of the seating arrangements, became known as the “orange box period.” By the second season of 1937/38 the showings were transferred to the more comfortable Oak Room of the Mansion House.

“From the days in 1936 when the founder members sat on orange boxes and viewed 9.5mm versions of ‘Potemkin’ and ‘Caligari’, the main work of the Society has been the presentation to its members of outstanding contemporary films and those of importance in the history of cinema”- Liam O’Leary The Society then expanded to various locations around the country with several branches in Dublin such as the Guinness Branch; membership rose to over 3000 throughout the country. The main function of the Society was to exhibit films, encourage discussion and interest in productions outside of the regular showings of commercial cinemas. It also created links with societies in the UK and Europe, as well as showing films from countries around Europe and the world. The Society expanded to include educational services such as a group for teachers, Schools of Film Technique, a Children’s Film Committee and later a Junior Film Society; as well as holding lectures and events promoting the analysis of film production and cinema.

A still from the Liam O’Leary-directed film ‘Our Country’. Image courtesy of the Irish Film Institute Archive

Interestingly, as an amateur group, the Irish Film Society was exempt from seeking approval from the state censor to show films; however the Society was not immune from political events, such as a reduced availability of films during the Second World War and also issues with choosing certain films from different countries while staying neutral during the conflict. Another political matter was the exhibition of Liam O’Leary’s film Our Country, a party political film for Clann na Poblachta which was widely attacked by Fianna Fail, particularly by the TD Seán McEntee. It resulted in a public exchange in the Irish press with McEntee connecting the film to the Irish Film Society, claiming that Liam O’Leary was a director of the Society when in fact he was an honorary member by that time. McEntee also claimed that the Society showed a large number of Russian films for Communist propaganda purposes, although this was later shown to be false as well. The Irish Film Society materials in the Liam O’Leary Archive are a snapshot of a Society that led the way in Ireland in the exhibition and discourse of contemporary, alternative and classic films; educating its members and encouraging a new generation of film makers and school children to look to Europe and the wider world for cinematic inspiration while also encouraging a home grown film industry.