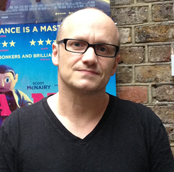 We were thrilled to welcome leading Irish filmmaker, Lenny Abrahamson, to the IFI on May 6th to give an extended introduction to Ingmar Bergman’s singular film, Persona, as part of our strand, The Bigger Picture.

About the film:
In her first collaboration with the director, Liv Ullman is actress Elisabet, inexplicably struck mute, and now cared for by nurse Alma (Bibi Andersson) in a remote seaside cottage, a relationship that ebbs and flows as each woman strives for superiority in an intense battle of wills.

The Bigger Picture is a new series in which a revered film from world cinema history is introduced by a filmmaker, film critic or academic who will aim to justify its importance in the canon and identify its resonance for modern audiences.

Filmmaker Lenny Abrahamson introduces Persona, as part of The Bigger Picture at the IFI by Irishfilminstitute on Mixcloud