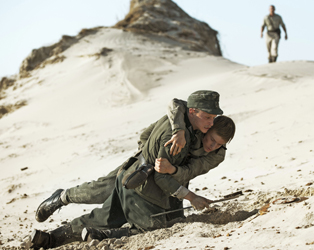 The setting is Denmark in the immediate aftermath of the war; embittered Danish Army Sgt. Rasmussen (Roland Møller, A Hijacking) is assigned a group of German boy soldiers who have been forced into neutralising and removing some 45,000 landmines planted by the Nazis along Denmark’s western coast in anticipation of an Allied invasion that ultimately occurred in northern France. Promised freedom on completion of their hazardous task, the boys must endure starvation and the very real prospect of maiming or death. Initially immune to the barbarity of his charges’ situation, the war-weary Rasmussen’s dormant sense of humanity is gradually stirred into action.